I check weather.com frequently.  It's a wellspring of information.  Today, I learned from that uber-useful site that Mount Etna erupted recently.  So I thought I'd find out more about the volcano.

Etna is a volcano on the island of Sicily, which is south of Italy.  It's about ten miles from a town called Catania, whose citizens have been dodging Etna's lava for centuries.
(Map from geology.com)

From a fresco in the cathedral at Catania depicting the eruption of Mount Etna in 1669. There are two vents shown here, the smaller of the two with a 9 kilometer-long fissure extending from it.
(Image from U.C. Davis) Etna's eruptions are so common that this recent outburst was described in the media mainly in terms of whether it might affect this year's Giro d'Italia.  Cycling fans were assured that the race would go on as usual, with the eruption acting as a picturesque backdrop.  Officials did have to close the airport in Catania for a while, though.
(Photo from the AP via the Daily Telegraph)

Lava that flowed down from Mount Etna to the town of Nicolisi in July 2001.
(Photo from Getty Images via National Geographic News)

An eruption on the flank of Mount Etna in 2007.
(Photo from Earthweek) 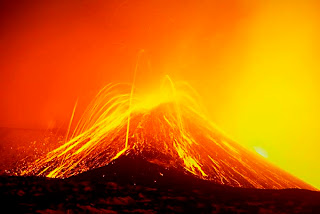 An especially pyrotechnic eruption from Mount Etna.  I don't know what year this was taken.
(Photo by Luke and Alyssa Meyr, sourced from MIS Blue Team Science)