Several years ago when I was visiting my friend Maximilian, I saw in his backyard a white bird with a long skinny neck and skinny legs.  I asked him what it was, a heron, a crane, or what?  He shrugged and said, "Goony bird."  He said that's what his grandfather calls any of those wading birds because it's so hard to tell one kind apart from another.  I have used "goony bird" with great satisfaction and success ever since.

A bunch of wading birds, or goony birds. (Actually, they're egrets.)
(Photo by KS Chak at Picasa)


But recently, as I have become more aware of birds in general, I decided I wanted to know the difference.  I asked a couple of friends what the difference was.  "One kind has a crook in its neck?" one friend ventured.  "Herons are blue," said another, "aren't they?"

The fact that my other friends didn't know the difference either was a sign: time for a Daily Apple. 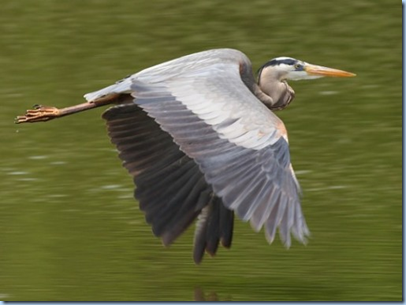 This is a Yellow-Crowned Night Heron. One of the few varieties of heron other than the Great Blue that lives in the United States. This one is from the Everglades. Doesn't look much like a heron at the moment, but wait til it flies and you'll see that characteristic S bend.
(Photo by Amy at Magnificent Frigate Bird) 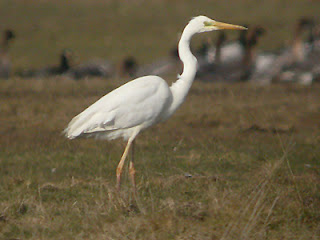 This bird was identified as a Great Egret, but its legs are yellow, which means it's a Great White Heron.
(Photo (c) Tristan Reid, sourced from Surfbirds.com)

Snowy Egret. Smaller than herons, smaller than the Great Egret. Tends to do this hunchback thing while sitting. Note the black legs and yellow feet.
(Photo by J.R. Compton)

Snowy Egrets look more majestic while flying. They hold their necks in the S shape.
(Photo by actual at Weather Underground)

Neck outstretched while flying means it's a crane. This happens to be a Common Crane.
(Photo by Dr. Glenn Olson, sourced from Journey North)

Whooping Crane in flight. These tallest birds in America nearly went extinct but are now making a comeback. Note the black wingtips and the red forehead and cheek. Beak is short, almost duck-like. No S bend in its neck while flying means it's not a heron or an egret.
(Photo from the Whooping Crane Eastern Partnership, sourced from US Fish & Wildlife Service)

You might be tempted to call this a heron, since its feathers are dark gray and it's walking with a bend in its neck. But it's actually a Common Crane.  Note the red patch at the forehead, the short beak, gray legs, and relatively smooth feathers except for that bustle-like tuft at the end. And remember, the S rule only applies during flight.
(Photo by David Hutton, from the BBC)


OK, so let me see if I can simplify this some more so I'll actually remember the differences: