I've done a couple of posts about tigers already, but I've got tigers on the brain, and I want to do another entry about them.

The other day I StumbledUpon a photo of a tiger licking her cub, and I wound up staring for a really long time at her fur and her stripes. So now I have lots of questions about a tiger's stripes. (not sure exactly where this is from, but I'm guessing the Toronto Star's Daily Beast)

This is probably the best photo I've seen that shows how a tiger can blend in with its surroundings.
(Photo by Steve Winter from National Geographic, via the Conservation Report)

But most of the time, tigers seem pretty freakin' obvious in their habitats. This is a male Sumatran tiger in the wild.
(Photo from animals verses animals. And yes, they've misspelled "versus.") 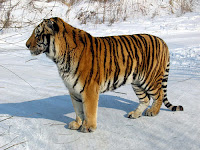 No trouble spotting the tiger in this photo.
(Photo from Siberian [Amur] Tiger blog) This tiger is pretty well concealed in the jungle, except that orange makes the animal pretty obvious to you and me.
(Photo from Susan Willett Bird's smart talk on conversation) 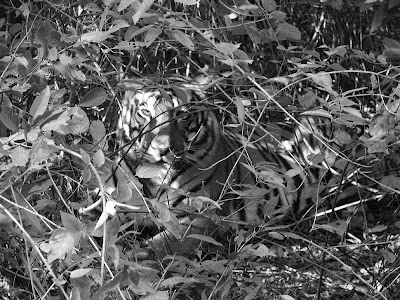 Here's the same photo in black and white. Much harder to see the animal now, isn't it?

Here's another photo of a tiger stalking its prey. Even in color, the tiger blends in somewhat with its background. But it's still pretty obvious to you and me.
(Photo from Steppes Discovery)

Now here's the same photo in black and white. Here, the black stripes stand out more obviously than anything else. The orange -- now gray -- is almost the same color as the grass behind the animal. 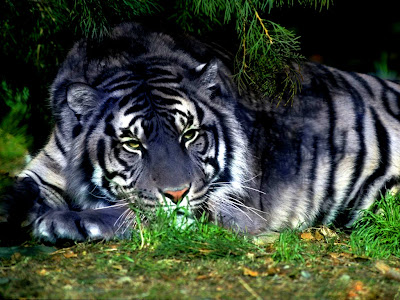 Black or melanistic tiger. These have never been considered as distinct species but variants in the coloring of the six existing subspecies.
(Photo from animaldiscovery-chanel and yes, they've chosen to spell it like the perfume rather than with two n's.) 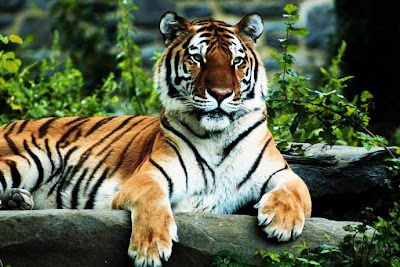 Quite simply, tigers rock.
(Photo from the US Fish & Wildlife Service, via Tiger Pictures & Facts)