Apple #569: Your Own Helicopter

The other day, a friend of mine was going to the airport and jokingly asked if I needed anything. Returning the joke, I said, "Yeah, pick me up a helicopter, would you?"

If you had your own helicopter, you could fly around places like this any time you wanted.
(Photo from Helicopter License Center)


But then I started thinking about actually owning a helicopter. In my fantasy-land it would be very convenient. I could take off and chopper the few hundred miles to visit my friends who are scattered around the country any time I wanted to. That would be pretty handy. The more I thought about it, the more appealing it seemed.

I'm sure it's way out of my budget ever to buy my own helicopter, but just for the fun of it, how much would it cost?

Since I'm assuming you might be interested in owning your own helicopter too, let's say we pool our money and go in on this together. 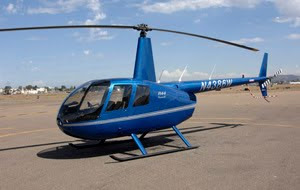 This 2009 Robinson R44 Raven II could be ours for only $409K.
(Photo from Corporate Helicopters)

Looks like Eurocopters have pointier noses than the Robinsons. I think I would want a round-nosed Robinson, only because the pointy noses remind me more of military purposes, and the round noses look friendlier. Though I suppose the round noses are less aerodynamic.
(Photo from Multiflight)

TC's chopper from Magnum P.I. The paint scheme was not custom-designed but one of several standard designs available upon purchase.
(Photo from Magnum Mania!)

Helicopter in a custom-built insulated hangar on a private site near Manchester, England. This hangar had to be a bit wider than the norm to accommodate the longer blades on this particular model of helicopter. These builders can include all sorts of things in your custom hangar, such as additional crew and shower rooms.
(Photo from Black Bird Hangars of Central Europe) 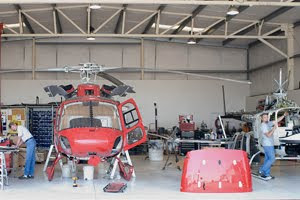 I found this chart of chartered helicopter flight times. Based on this map, I chose what seemed like an interesting trip, going from the center of the map, which happens to be Leeds, to Paris.
(Map from Multiflight)

This photo may be sufficient evidence to convince you that, in many ways, helicopters are superior to cars.
(Photo seems to be from Executive HeliShares; sourced from LAWeekly) Here's another way in which helicopters win: helicopters can tow airplanes.
(Photo from EnglishRussia)

All right, let's tally up all our costs and see what we've got. This is roughly how much it would cost to buy a decent helicopter, store it and maintain it properly, and fly it once on a 2-hour trip.

Still. It would be pretty cool to do something like this whenever you wanted. This chartered helicopter is flying over the Great Ocean Road coastline near the Kennet River in Australia.
(Photo and chartered flight available from heli experiences)


One Last Note: About Flight Plans for Helicopters

Ooh, I'm going here, on this helicopter tour of Maui. Circle above the island in just under an hour for $192. I'll meet you there.
(Photo from Sightseeing World)