As I type this, it's still Father's Day.  But by the time most of you read this, it won't be anymore.  So I wondered, what holiday is yet to come in the near future that I can help you prepare for?  A little Googling and I found the answer: International Picnic Day, June 18.

Le Dejeuner sur l'herbe (Luncheon on the grass) by Edouard Manet, 1862.  A French guy's idea of a picnic.  Involves nudity, of course.  What do you expect?  He's French.
(Painting by Edouard Manet, image sourced from 365 Foods)

Your picnic does not have to look like this.  In fact, if you're a living breathing human being, it probably won't.
(Photo from Latinas y punto)

Hopefully your picnic would look more like this.
(Photo from the Orange County Historical Society, sourced from Local Dog Picnic) 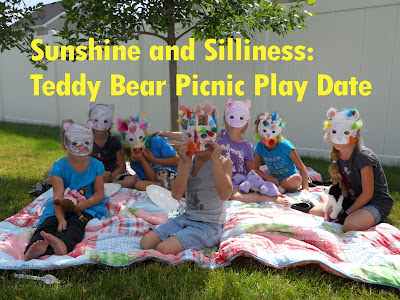 Or maybe your picnic would look like this.
(Photo from Sunshine and Silliness)

Egad. If you want to spend money to get a bag of stuff that would allow you to think that your picnic could be absolutely perfect -- though I think "picnic" and "perfection" are oxymorons -- you could get this deluxe picnic backpack complete with 4-piece place setting for $49.50.
(Photo & backpack from Lee Valley)

Or wait. Even better. This "suitcase picnic basket" has stainless steel place settings for 4, a fleece blanket, a cheese knife & cutting board, corkscrew, vacuum flask, 4 wine glasses, and a "fully insulated corduroy wine duffel."  For only $290!  Ai yi.  You'd need to take a vacation to get over the stress of paying for your picnic basket.
(Photo and picnic basket from Bed Bath & Beyond)

If you get one of those, then you're just asking for Yogi Bear to come find you.
(Image from The Gadgets Page)

Picnic area at Colerain Park in Cincinnati.  Picnic tables under a tree, plus one of those grill things, even a place to throw away your trash.  Looks like a great place to have a picnic.
(Photo from Colerain Township Parks)

How about a picnic on the beach?  This beach is particularly exotic -- it happens to be in Fiji -- but maybe there's a little inland lake near where you live.  Wouldn't it be nice to sit by that lake and have a little snack and listen to the water birds?
(Photo from Lalati Resort) 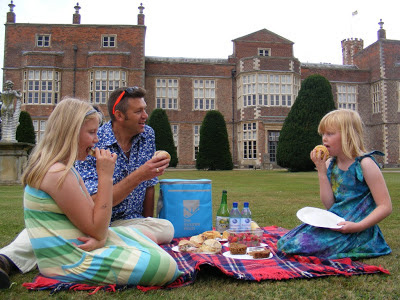 This British family is having a picnic on the lawn in front of some English school.  Why not have a picnic in front of your school? (For those of you living in England, there's an iPhone app that helps you find picnic spots in Britain: Great British Picnics.  What a great idea!)
(Photo from Traveling Greener)

A super-combo of an idea: tailgate picnic at the beach!
(Photo from Chronically Vintage)

The picnic bike, invented by a guy in Sweden whose name I think is Erling Ekmark.
(Photo from The Urban Observer)

The most important thing about a picnic is that everybody has a good time.
(Photo from Chronically Vintage)