Last week I had an appointment way on the other side of town before work. I got there early.  Exhausted due to a cold I've been battling, I parked in the lot, locked my car doors, put my seat all the way back, and intended to take a nap.  This particular location turned out to be much closer to the airport than I'd realized, I discovered by the number of airplanes flying over.  They were taking off, each one very loud at first but then slowly fading off into the distance.  After maybe a minute of quiet, here came another one roaring up into the sky.  This incessant noise of airplanes taking off one after another reminded me: it was Thursday, September 11. (Photo by addicted eyes at Flickr, sourced from TripCart)


So I started thinking about the events of that day as I remembered them.  I was nowhere near New York City or the Pentagon or Shanksville, PA on that day.  Everything I know came to me over the radio or by TV news or in the newspaper.  But because so much of it was broadcast, non-stop, live, and for so long, and mostly because it was so shocking and unbelievable, it is of course stamped on my mind as I'm sure it is for anyone who was alive and sentient on that day.

As I was recalling some of the events of that day, I realized there was a lot I didn't know about the plane that went down in Pennsylvania.  When I got home, I looked it up.  Because the whole "Let's roll" phrase got co-opted by politicians, I didn't pay much attention to the facts of what actually happened at the time.  So the other day I wound up learning quite a lot about what took place on that plane.

I went on to read about all sorts of things -- the hijackers, the contents of the toxic cloud of debris, specific engine houses of the FDNY and how they were affected, and on and on.  Once I'd started, I couldn't get it out of my mind.  I'd turn something over in my mind, imagining it, wondering at it, and discover I had another question.  Back to the internet to find out the answer.

Then I watched a program on the History channel, 102 Minutes That Changed America.  (The interactive thing they have on their website is worth checking out.  It gives you a piecemeal idea of what the documentary as a whole is like.) 
It's all videos that were taken by various people on that day at various places around New York City.  The videos have been edited together to be are presented in roughly chronological order.  There is no voiceover, no commentary, only the ambient sound in the videos.  If someone speaks to the cameraperson, you hear that.  If someone shrieks in the background, you hear that.  When the program comes back from commercial, you see a black screen with a running time stamp, and you hear audio from one of the recordings.  Then the visual fades in.

I found myself trying to remember, at what time exactly did the first tower collapse?  Wasn't it 10:02?  So I kept watching.  Even as I remembered that strange, detached, disbelieving feeling -- am I really seeing what I think I'm seeing?  Is that actually happening? --  I wanted to tell the people on the screen who were standing about, staring up at the towers and the black smoke billowing out of them to get moving, go, get out of there.  Because this time around, I knew what was going to happen.  I knew how real it was.  I wanted to take the shoulders of the firefighters as they walked past in a line, in full gear that would be all too insufficient, heading toward the towers to try to get more people out of them. 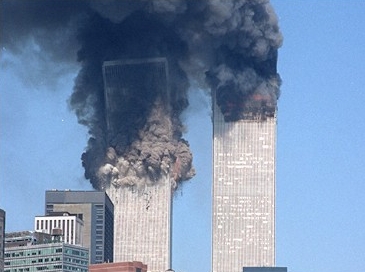 
The program goes until some time after both towers have collapsed.  There is hardly anyone in the streets, everything is coated in that terrible thick beige dust that one firefighter said was filled with tiny shards of glass, and everything seems coated in silence.  One cameraperson is walking down some street that is otherworldly and apocalyptic in this way, and out of the haze of debris emerges a large lump the same beige color as the debris.  It's moving, it's a man, covered in the terrible dust.  His hair, his face, his eyeglasses, his shirt, his arms, his legs -- everything about his person is covered in the thick stuff.  He says to the cameraperson, "I heard something give and I ran.  I'm 69 years old, but I can still run."  He continues walking past the camera, his shoulders stooped, probably from a lifetime of work at some desk that is now vaporized, his footsteps making hardly any noise in the dust-thickened street.

After I watched that documentary, it seemed as if it had all just happened.  The sights, the sounds, the emotions were so immediate, all over again.  The next day, I checked the news, expecting to see some sort of follow-up, someone talking about it.  But of course there wasn't much.  This did after all happen 13 years ago, not the day before.  But watching those videos of the planes plowing into the towers, the black smoke billowing out of them, the towers collapsing in on themselves with a horrible feeling of doom that you can feel collapsing in your stomach, and the apocalyptic streets afterward--it all seems to me now to have just happened.

I thought about discussing some other topic entirely in this blog post, especially since the spirit of this blog is supposed to be geared toward positive things.  But this has been so on my mind, it seemed flippant to talk about something mundane and silly.  So if I was going to do a post on 9/11, maybe I should give you a list of things that are somehow positive that have come out of the attacks.  But that is so one-sided, it seems almost like telling a lie.  Because what did happen first was awful.  To ignore that, to pretend like the carnage inflicted is somehow not worth mentioning, or is too unpleasant to mention, or should be passed over only slightly, is somehow to betray all those people who lost their lives, all those firefighters who did rescue people from those buildings, all those people who did manage to get out, all those people who still suffer the effects of that horrible toxic cloud of debris and the aftershocks of what happened on that day.


So, what can I tell you?  I think I'll pass along some of the things I've learned in all that I've read and watched over the past few days.  Some of the things you may already know; in fact, many of the things may not be new to you at all.  But these details filled in little gaps in my knowledge, or reminded me of aspects I'd forgotten.  Some of them might be demonstrations of the goodness of people during horrific events.  Some of them might be unpleasant or uncomfortable.  And, fair warning, some of them will be gruesome.  Because those are facts, too, things I've wondered about.  All of it falls under the question: What, exactly, happened?

I'll leave it to you to decide whether you want to continue reading or move along to something elsewhere that is more cheerful, more 2014.

Composite of the crew and passengers on board Flight 93.

Deena Burnett holding a photo of her husband, Tom, one of the passengers involved in resisting the hijackers. For more than a year before the hijacking, Tom had been attending daily Mass, and he believed that God had something important in mind for him to do. This may have been why he was able to keep calm and form a plan during the hijacking.
(Photo from Diablo Magazine) Ziad Jarrah, the hijacker who flew United Flight 93 into the ground. This photo really gets to me.  It was taken during his flight training in Florida in 2000. He looks like a pretty normal person, doesn't he?  I've stared at this photo, wondering how does a person go from smiling in a fairly normal way to hijacking a plane and killing scores of people.  Jarrah was born in Beirut, Lebanon, to an upper middle class family.  He, like the other hijackers, seemed normal, courteous, and friendly to Americans who met him in the years before the hijacking. One researcher who has studied the hijackers hypothesizes that it was becoming obsessed with religion, specifically with a doctrine that emphasized revenge and attacking others, that changed them.
(Photo from Wikipedia) Flight 93's impact site. It looks like a bunch of burned dirt because when the plane hit the ground, large sections broke off, and the explosions burst those to fragments. The rear of the plane was driven into the ground, and the loose soil collapsed in around it, effectively burying it. (See On Hallowed Ground)
(FBI - investigation photo sourced from NPS site) 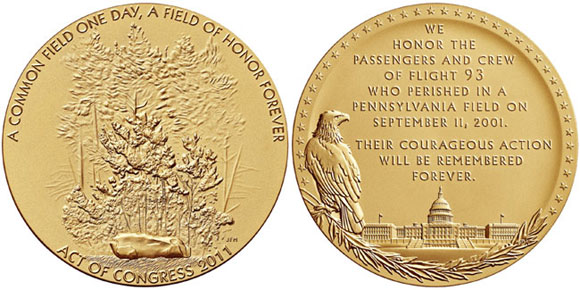 The Congressional Gold Medal awarded to the crew and passengers of Flight 93 that crashed in Shanksville, Pennsylvania, rather than into the US Capitol, thanks to their resistance.
(Photo from Coin Update) 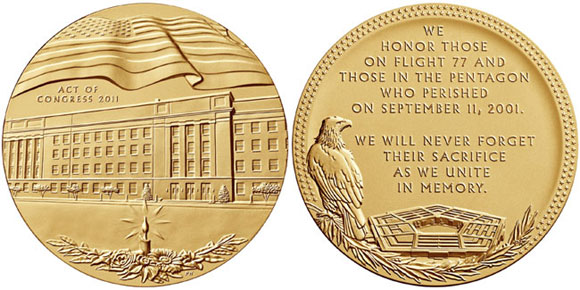 Congressional Gold Medal awarded to the crew and passengers on the flight that crashed into the Pentagon, and to the people on the ground who were killed.
(Photo from Coin Update) 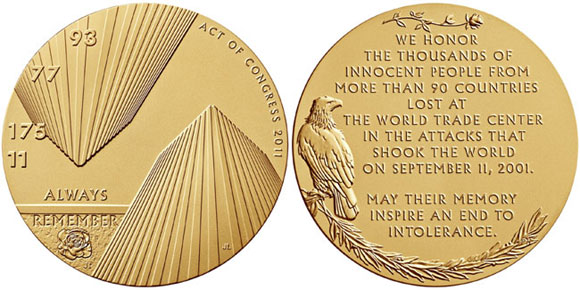 The Congressional Gold Medal awarded in honor of those killed at the World Trade Center towers. The numbers 11, 175, 77, and 93 on the front of the coin are the flight numbers of the planes that were deliberately crashed, and they are positioned as if on the face of a clock, at about the times when the planes crashed.
(Photo from Coin Update) The site of the crash of Flight 93 is now a memorial site.  There is a large plaza with a walkway that leads to a wall bearing the name of each crew member and passenger. The entire memorial is surrounded by a field of wildflowers. Their names are also engraved in bronze at the 9/11 memorial site in New York City.
(Photo by Amy Dreher, from the 9/11 Memorial)


That's all I can do for today.  I guess I'll have to break this into multiple posts.  Which means the flight that hit the Pentagon will be next.


Sources
National Commission on Terrorist Attacks upon the United States, "We Have Some Planes"
Tom Burnett Family Foundation, Transcript of Tom's Last Calls to Deena
The Age, "Let's roll": A catchphrase that became a battlecry, September 9, 2002
The Age, On Hallowed Ground,  September 9, 2002
Diablo Magazine, "This is Not my Life. My Life is Quiet, Suburban, and Ordinary." August 26, 2011
The Washington Post, The 9/11 Hijackers: Perfect Soldiers, May 1, 2005
Philly.com, Flight 93 families honored, and thanked, at U.S. Capitol (article),  Flight 93 families honored, and thanked, at U.S. Capitol (photos), September 11, 2014
US House of Representatives, Congressional Gold Medal Recipients
Posted by the apple lady at 2:05 AM