Continuing my previous entry about the 9/11 attacks, I'm going to tell you a few things I learned about the plane that crashed into the Pentagon.

I don't know about you, but I tend to think of this one a little differently than the others because the building that was hit was a military building.  As if, all those people working there were military employees of one degree or another, and when you sign up for that job, you know that violence and death might come with it.

That said, it probably doesn't get more "desk job" than the Pentagon.  I doubt that any of the people who worked there ever expected an attack to land right on their doorstep -- or their very desk.

But then I only recently learned that over half of the people in the Pentagon who were killed were not members of the military, but were civilians. The Pentagon, headquarters of the US Department of Defense. This photo was taken in 2008, after the 9/11 attacks but before the entire reconstruction was complete -- though I don't see any signs of work in progress.
(Photo from Wikipedia)


Here are some numbers: Barbara Olson née Bracher, one of the passengers on Flight 77.
(Photo from Find a Grave)

This gives you an idea of the vertical size of the impact into the side of the Pentagon.
(Photo from the FBI)

In this overhead shot, you can see the hole in the outer wall.  It's hard to see any damage to the 2nd ring, but then you can see the blackened area on the inside of the 3rd ring
(Photo from the FBI)

Devastation, two rescue workers, and their dog at work.
(Photo from the FBI) 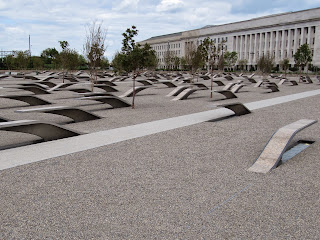 Benches at the Pentagon Memorial. There is a little pool of water beneath each bench.
(Photo by VeloBusDriver at Flickr)

Janice M. Scott, one of the scores of people killed by the attacks on 9/11.
(Photo from The Washington Post)

Johnnie Doctor, Jr., another of those killed in the crash into the Pentagon.
(Photo from The Washington Post)

What the Pentagon Memorial looks like at night.
(Photo from mla.march.penn)

Sources
National Commission on Terrorist Attacks Upon the United States, "We Have Some Planes" and Heroism and Horror
FBI, Ten Years After: The FBI Since 9/11, Response and Recovery: The Pentagon in Flames and The Flights
The New York Times, Barbara Olson, 45, Advocate and Conservative Commentator, September 13, 2001
Daily Mail, Wife's secret call from hijacked plane [date not provided]
CBS Evening News, Heroic tales from the Pentagon on 9/11/01, September 8, 2011
Los Angeles Times, Pentagon, a Vulnerable Building, Was Hit in Least Vulnerable Spot, September 16, 2001
The Washington Post, A Long-Awaited Opening, Bringing Closure to Many, September 12, 2008
Posted by the apple lady at 1:36 AM