I went to an actual movie this weekend. In the theater and everything.  It's been many moons since I did that.

I saw It Follows, if you're interested.  In spite of the many questions I had -- what exactly happened with the guys on the boat?  What was the swimming pool plan supposed to be? Are there specific rules about how the transfer of following happens, I mean, do certain things need to be achieved? If you see it, you'll know what I mean.

In spite of all those questions, I liked it.  That conclusion does not seem like it would follow my list of questions, but it does follow that since the movie was set near Detroit in a landscape I recognized, and it did cool things with setting and the sense of time, I would find it eerily familiar.  It also follows that, since I can make many puns with the title, I would like it.

Screenshot from It Follows
(Image from Entertainment Weekly)


Anyway.  The point of all this is that a Daily Apple question emerged prior to said watching of said movie.  The friend with whom I went to said movie --we'll call him JohnCarpenter -- said, at the conclusion of the trailers, "Wait a minute. They're called trailers, but they show them before the movie.  Shouldn't they be called previews instead?"

"the serial detailed the experiences of Kathlyn Hare, the pretty daughter of an explorer (Lafe McKee). Kathlyn resided in a mythical India, fighting off unwanted advances from a handsome native, Umballah (Charles Clary), when not battling an endless array of ferocious jungle fauna." She also befriends native servants and frees the enslaved peoples. Naturally.

Newspaper ad from the Chicago Tribune for The Adventures of Kathryn. It's hard to see at this size, but the ad includes a list of Chicago theaters showing the movie. Eventually, some 200 papers ran the serialized story, and the serialized movie was shown in theaters around the country.
(Image from Carole & Co.) 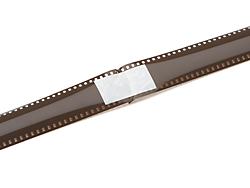 Back in the day, this is essentially how two pieces of film were spliced together -- with tape or glue.
(Photo from ULine)


Finally, I just want to point out that this entry about trailers was inspired by a movie called It Follows.  Do you follow?


Sources
The Straight Dope, Why are they called "trailers" if they're shown before the movie? November 7, 2007
Filmmaker IQ, The History of the Movie Trailer
The Dissolve, Becoming attractions: A brief history of film trailers
Priconomics, Why Are Movie Trailers Called "Trailers"? March 18, 2015
The New York Times, The Adventures of Kathlyn [Serial] 1913 Review Summary
Nicolae Sfetcu, The Art of Movies [ebook, unpaginated]
IMDb, Terminator 2: Judgment Day trivia
Posted by the apple lady at 12:10 AM