Apple #708: Behind the Daily Apple -- Constructing a Search Query

After my last entry (on movie trailers), Daily Apple reader Mahalia wanted to know how your Apple Lady does what she does.  As she put it, how does an entry get researched and written, and how do I find the answers to people's questions.


I told her I Google it.

Which made her laugh and say, OK, but it seems like my entries are more focused and thorough than a list of Google results, and there are complementary visuals, too.  So I said I was being flip, that there is more to it than just typing words into a Google search box.

And actually, when I've looked things up for other people, they'll say, "How did you find that?"  I'll show them the search I did, and they'll say, "I wouldn't have thought to do it that way."  I don't think what I do is anything particularly magical, in fact it seems pretty obvious to me, but then, I learned this skill in library science school years and years ago, so at this point, it is second-nature to me.  Not everyone knows how to put together a good search query.  And since that is where every Daily Apple begins, let me start there. 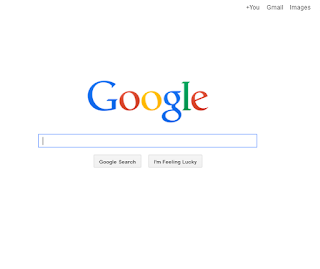 The Google search box. The secret to your Apple Lady's success.

What about doing a daily apple entry about the disposable lighter? i know zippos and other butane lighters have been around for awhile, but what about the plastic disposable Bic? So ubiquitous these days.

[Editor's note about screenshots: Blogger does not allow screenshots to be copied & pasted into an entry. That would be way too easy.  They must be saved as images & uploaded. Doing that changes all sorts of things about the image -- mainly makes them too small. So if you want to read what the screenshot-images actually say, you have to click on them to see them in an englarged photo viewer. When you're done, click the x in the top right corner of the photo viewer to return to the blog.  Total pain in the behind, I know. But you can thank Blogger for this.] 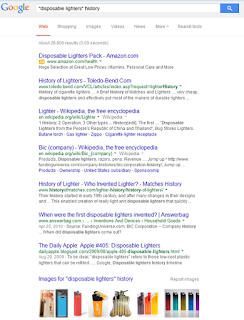 Today's Google search results for "disposable lighters" history. One of the things I don't like about Google is that they pay their bills by putting paid-for links to product purchases at the top of their search results. This would be like walking up to your friendly local librarian and saying, "I need to know about the history of aspirin," and before telling you where to find information about that, she would whip out a bunch of samples and ask you rapid-fire, "Would you like to buy this aspirin? This other kind of aspirin is very popular, perhaps you would like to buy some of that instead." And you would answer her, "But I just want to know about aspirin."

Google has also taken to providing you with images that match your search results, which can come in very handy sometimes.  For example, if I've seen a type of bird and I type in what I think is its name or else my description of it, those images will show me if I've got the right name for the bird I've seen or will help me choose among slightly different images for the one that matches most closely with the bird I saw, and that will take me to a page that tells me all about that bird.  In other words, the image search sometimes helps me narrow my choices by kind or species.

Finally, please to note the hit that comes up at the bottom, just before the image results. 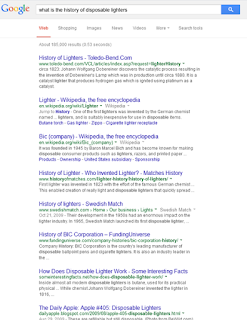 Today's results for a natural language search in Google for what is the history of disposable lighters.


Why it's Important to Define Your Question 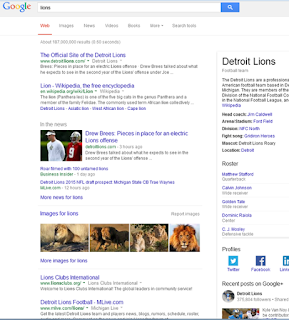 Today's results of searching Google for the word lions. 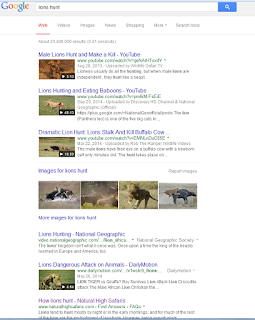 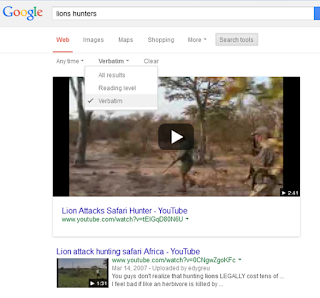 Screenshot of how to do a Verbatim search. You'll have to click on the image to see it clearly (thanks, Blogger, for the obfuscation).

Synonym Searching -- The Magic of Or 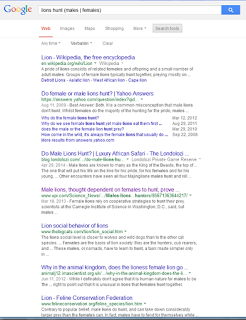 Male lion hunting an eland. People tend to believe pictures more than words, so here's a picture.  We'll talk about how to find images in the next entry.  The eland got away, by the way.
(Photo from Africa Geographic)

Here's a female lion hunting a water buffalo, by herself, in the daytime.  Maybe there are other female lions nearby, I don't know.  But it's probably a good idea not to generalize too much about animal behavior.  As we who are animals ourselves know, we don't always conform to type. Especially where gender is concerned.
(Photo from Facts Legend)

What You Know Now