I confess, I wear hosiery. In the winter I prefer tights because they're warmer, but in fall or spring when I don't want something as heavy and warm as tights, I like pantyhose better (much as I detest that word, or pretty much any word involving "panty").

But the dang things get holes in them after two or three wearings. Unlike socks, they can't be sewn up or fixed in some way. You can try to stop a run or a hole from getting bigger with nail polish, but sometimes the hole or run busts right through and keeps going to encompass several toes or extend all the way across the foot.

Keep wearing a pair of hose long enough and any run will turn into a ginormous thing like this, I don't care how much nail polish you use to try to stop it.
(Photo from Tanng J)


I'll also turn them around so that the hole that started on top of one toe is now on the bottom of the toe, but sometimes that hole gets bigger down there, or another one starts at the top of another toe. So my toes are poking through the dang things all over the place, which gets uncomfortable not to mention annoying. The rest of the garment is fine, but the toes are shot. The whole pair is then worthless and must be replaced.

Is there any way to make these stupid things last longer?

These fancy pairs of hosiery are pretty and they're fun to wear. But they probably don't survive many wearings at all.
(Photo from The Daily Green)


Lots of sites have many suggestions. Some of them I already do, to no avail. Other suggestions are new to me. I'll separate the suggestions that way.

Tips I Do Already

If it says "support" on the package, those are probably going to be more durable.
(Photo and pantyhose from onehanesplace)

This kind of hole and its related runs probably came about because the wearer bumped against something sharp or maybe she accidentally put her fingernail through the hosiery while putting them on.
(Photo from eHow)


Suggestions That Are New to Me

I've only ever seen spray starch in cans that my mom used while ironing. This is a gallon of liquid starch. One bottle costs about $3.
(Photo from thriftyfun)

"When you get something real cold, the molecules stop moving, then you bring it back to room temp and as the molecules warm up they rearrange and release much of the internal stress between them. This makes the material very uniform on a molecular level. Thus, internal stress is reduced as things warm back up. This reduces the weak spots in the nylon material and allows the panty hose to stand more abuse prior to tearing or 'running'."

This mom keeps her pantyhose in the freezer. You can see the large package sticking up at the left.
(Photo from The Daily Green) 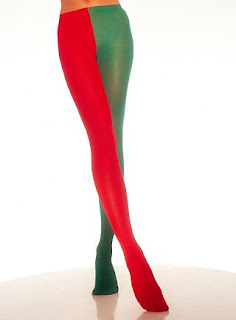 If you go the doubling-up route, you'll want to be careful about matching the two legs with each other, or you might get something like this, except even less fashionable.
(Photo from Just Humor Me)


After having read all these recommendations, especially the odder-sounding ones like freezing the pantyhose, I thought I'd consult the expert. Who knows more about pantyhose than Heloise? Interestingly, when I searched her site (or ran several searches for "pantyhose" and "Heloise"), I found scads of tips for what to do with those old pantyhose that you can't wear anymore. I didn't find a single tip about how to make your pantyhose last longer.

Tree Hugger is another place that has lots of suggestions for what to do with your old pantyhose.
(Photo from Tree Hugger)


Wear Something Else Instead

I thought this was kind of funny. A lot of people's suggestions about making pantyhose last longer included at least two or three ideas in this category -- simply avoid them altogether. Which says to me that it's pretty much a losing battle, trying to make these things last any length of time.

Trouser socks are hosiery in knee-high form, with some added durability.
(Photo and this pair available from Simply Tall)


One thing that everyone agrees on: the expensive kind are no more durable than the cheap kind. You might buy the pricey kind because you like the way they look or they've got one of those built-in body-shaper things (a.k.a. girdle), but don't expect them to last longer just because you spent a lot of money on them. The reverse is also true: just because you get the cheap kind, that doesn't mean they'll fall apart faster.

So I guess the moral is, buy what you like, do your best to make them last, and move on.

If I didn't care anything about price, I'd try these. It's hard to tell from this small photo (the only one I could link to here) but they look pretty good to me. They might also be the answer to my question. They're matte tights, but they look like pantyhose. So they might last as long as tights. The drawback? They're $48.00 a pair.
(Photo and Wolford 'Fatal 15' Seamless Tights from Nordstrom)

There's also these, which are supposed to look transparent, so they're probably fragile as all get-out. But from the photo and the description, it sounds like they'd be smooth. As it happens, the description does have a percentage content breakdown. They're 96% polyamide (a.k.a. nylon), 3% elastane (generic for Spandex), and 1% cotton. They're sheer, with a sheer toe, of course. Completely indulgent purchase this would be. But if I had a kajillion dollars, I'd try them.
(Wolford Naked 8 Sheer Pantyhose, $30.00 at bare necessities) 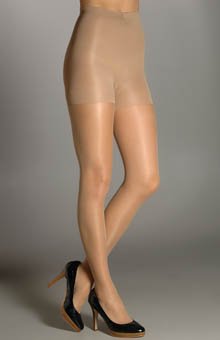 These are more in my price range. I like the silky shiny ones, but they wear out at the drop of a shoe. These are -- get ready for this uber-long name -- Berkshire Silky Control Top Extra Wear Sheer Lycra Leg Hosiery. The color is French Coffee.
(These range in price depending on the color, but this one is $5.21 per pair through Amazon. Not bad.)


All right, that's enough of my pipe-dream hosiery shopping. You're just lucky I didn't start looking at tights!

Oh, I almost forgot: if you have tried any of those techniques that are new to me, tell us in the comments how well they work (or maybe don't work) for you.