Someone brought candy corn in to work the other day, and I ate some. That sweet, smooth, creamy flavor reminded me immediately of when I was very little.

When my mom went grocery shopping, she took me with her because I was much too small to stay at home, and she told me I could have one treat at the beginning of the shopping trip. As an adult, I see this now as a clever trick to keep me occupied while she was shopping. But as a little kid, I thought, Oh boy! Whatever I want! Nearly every time, I chose candy corn. I loooved candy corn.

Candy corn. Beloved by thousands for over a century.
(Photo from Wikipedia)


Now, as the Apple Lady, I want to know how it's made.

In the variant candy corns with a brown layer, the brown is chocolate-flavored.
(Photo from College Candy) 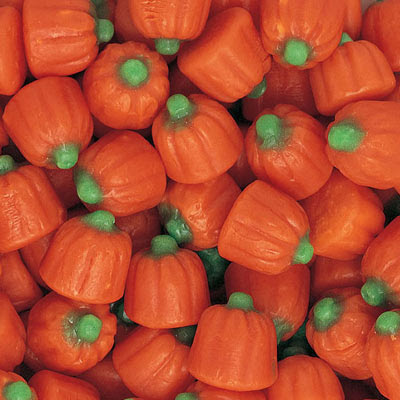 This video from the Food Network shows parts of the manufacturing process in action. My favorite part is when all the candy corns are going down the chute into those bins. Sorry about the commercial.

I have never seen "bunny corn" before, but apparently it's out there.
(Photo and bunny corn, available in 10-lb cases, from MyPartyPlanner.com)


I would also like the answer to this burning question: do you eat candy corn from the top down, or the bottom up? Candy corn cupcakes
(Recipe and Photo from The Little Kitchen)


Sources
TLC Howstuffworks, What is candy corn and how is it made?
enotes, How Products are Made, Candy Corn
Haunted Bay, Candy Corn
Posted by the apple lady at 7:42 PM