Apple #655: How Many Lakes are in Minnesota?

This weekend, I went with my dad and my brother to see the Minnesota-Michigan game.  Before the game, my brother lapsed into one of his behaviors that I remember all too well from growing up with him.  He started asking a whole lot of questions, on this occasion, about lakes in Minnesota.  I'll show you what I mean:

"There aren't really 10,000 lakes in Minnesota.  [I answered no, there aren't, there are more than 10,000.]  How do you know?  Who counts them?  Who decides what's a lake and what's a pond?  Why does the number change?  I've been to Minnesota, and I've flown over it too, and I haven't seen that many lakes.  I don't think they have 10,000 lakes in Minnesota.  Are they cheating and counting some Canadian lakes as theirs?" etc. etc.

Minnesota.  My brother would probably say to this, "I don't see 10,000 lakes.  Where are all the lakes?  Are you sure somebody didn't just make that up?"
(Map from Aquarium Pros)


Not having all my resources at my disposal, I could not adequately counter Mr. Annoying Question-Man.  (He didn't really want the answers anyway; he just wanted to be annoying.)  But now that I'm home with my laptop & the internet available, I am going to find the answers to his questions anyway.  So there.

This graphic gives you some idea of the number of lakes in Minnesota.  But I can just hear my brother asking about 25 more annoying questions in response to this.  So I'll see if I can find other visual evidence.
(Map from RMB Environmental Laboratories) 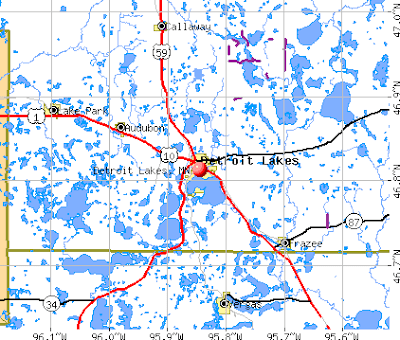 Here's a little slice of Minnesota: the area around Detroit Lakes, Minnesota.  A ton of lakes just in this one area.  I'd like to say, you can extrapolate from this one place to the rest of the state, can't you?  But I know, I know, extrapolation works until it doesn't, as Simpsons fans will recall.
(Map from City-Data.com) 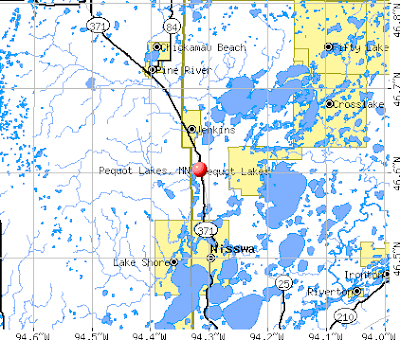 I can't resist, though.  Here's another slice of Minnesota: area surrounding Pequot Lakes.  Dotted and sprinkled and pock-marked with lakes of all different sizes.
(Map from City-Data.com)

Why Does the Number of Lakes Change and Where did They all Come From?

Lakes constantly undergo evolutionary change, reflecting the changes that occur in their watersheds. Most lakes will eventually fill in with remains of lake organisms and silt and soil washed in by floods and streams. These gradual changes in the physical and chemical components of a lake affect the development and succession of plant and animal communities. This natural process takes thousands of years. Human activities, however, can dramatically change lakes, for better or worse, in just a few years.

Kettles left behind after the glacier receded became today's lakes.
(Image from Wikimedia Commons, sourced from Reflections of a Travelinguist)

Ignoring the Great Lakes, the lakes in Minnesota look a little more visible.
(Map from Wikimedia)

What is a Lake, Anyway?

The one thing that isn't muddy is that Minnesota does have a ton of lakes, there are more than 10,000 of them, and nobody's lying or cheating about that, they're just rounding off the number.  Geez.

As far as I'm concerned, though, no other lakes can compare to these.
(Image from The Nature Conservancy)


P.S. My brother is a water engineer.